Designing with OTP Applications in Elixir

I’ve been looking forward to this part of the project for some time. I’ve written posts on OTP application design but haven’t yet put together a real application of my own. I found it hard to get started with this iteration and have been thinking about it for some time. I tried approaching the problem from a few different directions.

First I asked myself: “What is the restart strategy that I want for the various processes involved?” I was thinking that if any processes die I should restart the whole thing. But then I realized that I occasionally get errors like this:

when fetching Tweets. These errors are recoverable now and should remain that way.

I took a step back from this problem and worked on a few other things. Also, I attended ElixirConf in Austin, TX. On the plane ride over I finally read Elixir in Action

by Saša Jurić. I really wish I had read this book earlier, it has been recommended to me many times. Part II of Elixir in Action gives an amazing description of creating OTP applications and assembling them together to build up larger programs. I can’t recommend this book enough!

When I returned home from ElixirConf I put what I’d learned to work and enumerated all the Domain Scraper processes I have control over:

I thought about what would happen if any of these processes fail. What happes if …

This again led me to: Restart the entire tree if anything dies.

But, do I really want such coarse grained control over processes?

Finally, I looked at the problem from the point of view of the major components. How are these components organized? The components are:

After thinking about it for some time I realized that these components should be separate OTP applications. They are logically separate pieces of functionality and can stand on their own. As applications I can still use them together and flow the data through like this: 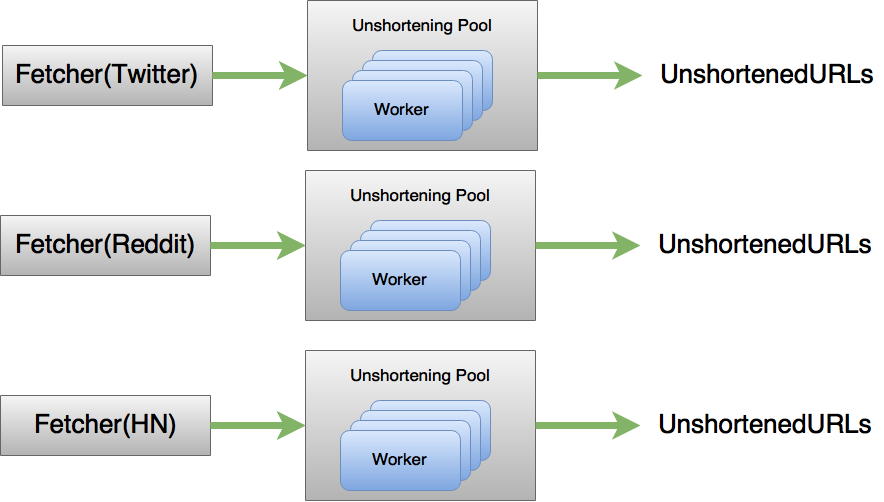 I realized, that I’m missing aggregation in the diagram above. And as I thought about how to add it I started to realize that it would make more sense for Unshortening Pool to be able to accept multiple input streams. That way we would have something more like this:

Then I realized that I can almost make this work right now. Fetchers route data to the pool using the PoolUtill.map_through_pool interface that we developed last week. map_through_pool doesn’t imply exclusive access to the pool. Any number of clients can map data through the pool and the pool could provide a single output stream of completed work. The pool just needs to be large enough to accommodate all the work.

After thinking through the design I was ready to start writing up a new prototype iteration to reduce the ideas to practice.

I needed to walk away from P1, the project I already had, and start a new umbrella application to host the several applications I’ve identified in the design. I created it like this:

I’m on the ninth iteration, hence the name p9. And you can follow along with the source in the github repo ds_p9.

I started off by recreating the Twitter fetcher within p9. First, I had to create it as a supervised, child application:

I copied over the relevant files and did a little renaming. The Twitter.Fetcher, Twitter.Parser and Decoupler are basically the same. But there are a few more files to turn this all into an application. First, there is twitter/lib/twitter.ex:

This is the main module for the application and uses Application. The start/2 function is required and is used to start up Twitter as an OTP application. This function creates the supervision tree. Most of the work specific to Domain Scraper is in the children specification. We start up one worker process which is defined by the Twitter.Server module which we will investigate next. Finally, start/2 has some boilerplate code (generated by mix) that starts the supervisor using the children specification.

test_runner is a function I wrote for testing. I’m not doing a good job using ExUnit to test these OTP applications. That’s something I will need to learn to do soon.

The next new file is twitter/lib/twitter/server.ex:

This is a GenServer which I’ve implemented using ExActor. Twitter.Server.start_link/2 will start up the server and will start the Fetcher and Parser. The get/0 function will return the resulting stream. configure_extwitter/0 is copied over from some other part of the old iteration and is just used to configure ExTwitter. There’s not really much here. This is just a process to create and execute the Fetcher / Parser stream.

Note, at this point we haven’t connected the Fetcher / Parser stream to anything. We’ve completed one part of our design but need to write the Unshortening Pool before we can connect anything together.

So, the next piece to build is the Unshortening Pool. The process here was very similar. I copied over the code. Note, that in the prototype p8 I already had setup a supervised application for the pool.

With the Twitter and Unshortening Pool applications ready I should be able to run things end-to-end. I ran this in iex:

And this worked pretty well for streaming out an endless supply of links from Twitter. I did find that I need to increase the size of the pool. I had only 10 items in previous iterations and this could fill up if we encountered too many slow resolving URLs.

What did we learn?

The first thing I learned was how to build a real umbrella application and how to connect the applications together. I also learned more about creating OTP supervised applications.

We learned how to look at the different pieces of the program and to identify parts that make sense as independent OTP applications. We came up with a design based on this.

We validated the design, at least to some degree. In the “Next Steps” below we’ll see that there is a little more to do.

There are a few things to do next:

I can put everything together and run end-to-end in iex. But really the OTP application structure should assemble everything automatically.

Second, I wanted this design:

but so far I’ve only build this much:

and honestly, I had this much last week.

I like the new architecture, or at least it looks good on paper but to really validate our design we need at least one more fetcher.

Next week I plan to develop the Reddit fetcher and in the following week we will plumb everything together so that the OTP applications are setup to talk with one another.